“...truth has been having a difficult time of it these days. Both misinformation and disinformation, including false statistics, are circulating with new reach, speed, and effect, from social media feeds, to political party platforms, to actual seats of government." - Sophia Rosenfeld, Professor, University of Pennsylvania at the 2019 PARIS21 Cross Regional Forum
“In an atmosphere of fake news and mistrust, national statisticians have to put their heads above the parapet and fight against dodgy numbers” - John Pullinger, President, International Association for Official Statistics and former national statistician, UK
“We should stop paying lip service to trust and start being faithful to our conscience in putting data & statistics at the service of the public good” - Samuel Kobina Annim, Government Statistician, Ghana Statistical Service
“By doing something as simple as breaking down your various user groups of statistics & seeking to understand how/why they use your products, you can better understand how to communicate with them & build trust.” - Phetsamone Sone Deputy-Director, Lao Statistics Bureau
"In order to enhance trust, we need more and better data" - Silvina Viazzi, National Director of Dissemination and Communication, Argentine National Institute of Statistics and Censuses (INDEC)

Submissions for the PARIS21 2020 Trust Initiative are now closed. We are now going through the review process and will contact the shortlisted candidates in due time. Thank you for your patience.

PARIS21 is seeking proposals for innovative projects that enhance trust in data and statistics in low and middle-income countries. The initiative will sponsor six to twelve-month projects up to 50 000 EUR each. Eligible candidates include national statistical offices (NSOs) or any private, public or civil society entity in joint partnership with a NSO. The initiatives will foster the implementation of innovative solutions across any of the statistical, structural and/or reputational aspects of trust in the national statistical system (see here for more information).

Example: A civil-society organisation and The Central Bureau of Statistics of a country are co-creating a ten-month training programme for journalists on how to use data accurately in reporting, aimed at increasing public confidence in official statistics. This directly affects trust in the statistical institution (NSO) as well as statistical products (official data) through the reputational factor of trust as per the OECD framework. They can apply to the Trust Initiative for a grant of 30 000 EUR to cover workshop costs, production of materials and workshop participation.

Submissions for the PARIS21 2020 Trust Initiative are now closed. We are going through the review process and will contact shortlisted candidates in due time. Thank you for your patience.

The initiative was launched at the 2019 Cross Regional Forum on “Building Trust in Data: What’s new for National Statistical Systems (NSSs)?” and aims to support the design and funding of pilot activities in countries to improve trust in official statistics.

Why have we launched the initiative?

Trust in data and statistics is paramount to the production and use of data. But the issue of trust has gained renewed impetus in the digital age, with new data sources, technologies and actors in the ever-expanding data ecosystem.

Trust in governments has deteriorated overtime. According to a 2017 OECD report, only 43% of citizens trust their government. This undermines the effectiveness of public policies. The 2019 Global Report of the Edelman Trust Barometer also notes that there were only modest gains in trust across the four important societal institutions—government, business, media and NGOs as compared to 2018. In particular, the government and media remain most distrusted by the general population vis a vis the informed public.

These trends have ushered in a new post-truth political climate characterised by amplified disinformation and biases.

Many NSSs are starting to adapt to this new context, realising data quality is necessary but not sufficient to build trust with its users. Yet for many others, especially among low-income countries with fledgling statistical systems, the path to increasing relevance and authority may not be obvious.

Against this background, the "PARIS21 2020 Trust Initiative” will support pilot projects in low and middle income countries that aim to foster trust in official statistics between different stakeholders. These projects will identify a particular trust issue for data and describe how they plan to advance trust in that context.

The proposals eventually selected will be presented in a side event of the 2020 Cross-Regional Forum (Fall 2020). The final results and lessons learnt, including future plans for continuity and scale-up, will be presented at the PARIS21 Annual Meetings in spring 2021.

The amount of funding available for each project can be up to 50 000 EUR, which can be 6 to 12 months long

We are especially interested in proposals that bring different types of organisations together to enhance trust in official statistics and the National Statistical System.

The geographic focus on the project should be low- and middle-income countries.

Launching. The initiative will be launched on 29 October 2019 as part of the PARIS21 Cross-Regional Forum 2019, with a call for proposals.

Selecting. A selection panel consisting of PARIS21 and individual experts will review the proposals in May/June 2020. Selected finalists may be required to supplement their submissions with additional information, including interviews.

Implementing. The implementation would begin from July/August 2020.

Sharing results. Preliminary results from the funded projects will be shared in a side event of the Cross-Regional Forum 2020 (Fall 2020) and final results and lessons learned, including future plans for continuity and scale-up, will be presented at the PARIS21 Annual Meetings in 2021.

Projects should foster the implementation of innovative solutions across any of the statistical, structural and/or reputational aspects of trust in the NSS. The PARIS21 background paper on the topic explains the key notions behind this topic, which you can access here. In summary:

A proposed project may address one or more of the above factors. The scope of the PARIS21 Trust Initiative is in line with the measurement framework for trust in official statistics, as proposed by the OECD in the figure on the left. 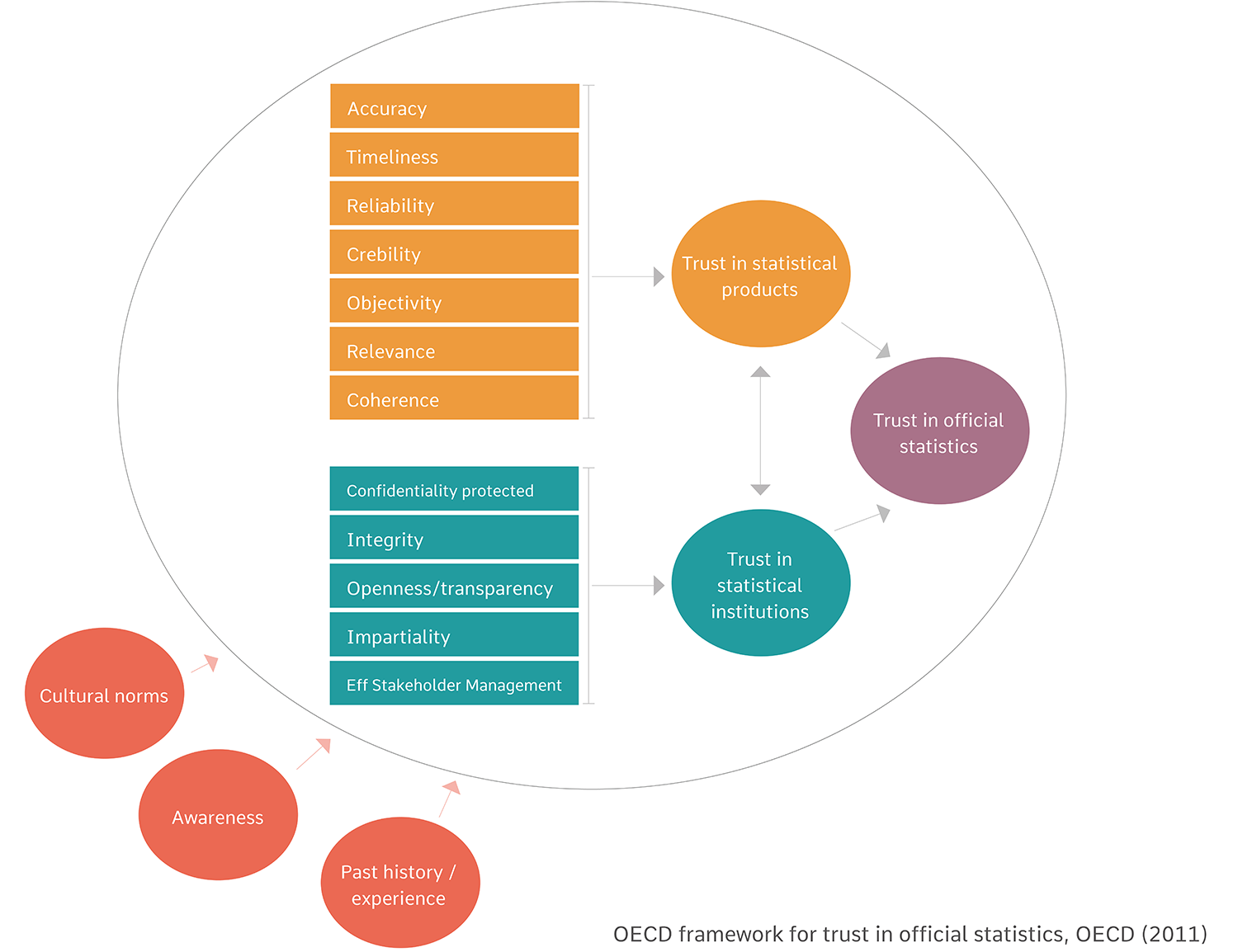 Sample projects could include:

Engaging with the media to bridge to the occasional users

How can I submit an application?

To start your application, click the " Submit Proposal" button at the top of this page.

You can also download a word version of the application form (just for planning purposes) from here.

Who will review the proposals?

Proposals will be reviewed by a multi-stakeholder peer review committee. The committee will include members from PARIS21, representatives from other organisations, and individual experts.

How many awards will be given?

The number of awards issued will be in line with our overall budget and dependent on budgets of the top-ranked proposals.

Costs directly related to the project activities, including personnel, travel, events, publication of reports, development of technology and M&E. This is not an exhaustive list. Other costs may be considered on a case-by-case basis.